Women’s Aid Federation Northern Ireland welcomes the Labour Party’s stand against the two-child tax credit cap and rape clause, and their demand for a full parliamentary debate on the issue. 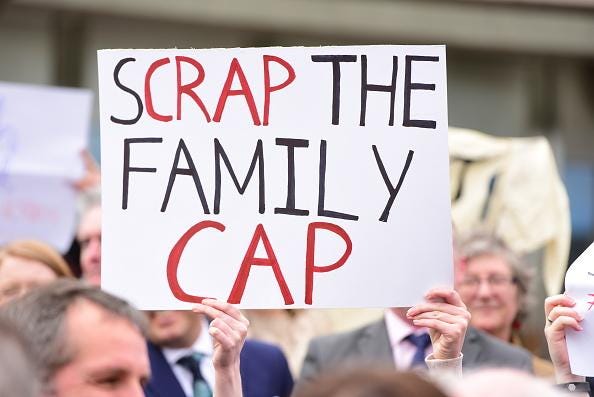 Women’s Aid is opposed to the two-child cap in its entirety, and the rape clause which forces women to prove that they have been raped to access child tax credits for a third or subsequent child. The ‘rape clause’ policy, which was introduced by the Conservative Government earlier this year, flies in the face of all good practice for supporting rape victims, and has been roundly condemned by domestic and sexual violence experts, health professionals and children’s campaigners alike.

Requiring women to prove that they conceived a child through rape to access child tax credits is cruel and inhumane. The policy will retraumatise many victims of rape, while others will simply not come forward to claim what they are entitled to, leaving them and their children in poverty. The fact that this policy is being implemented at the same time that refuges and support services are having budgets decimated and doors closed is a cruel irony not lost on us.

As Shadow Northern Ireland Secretary Owen Smith has pointed out, implementing the policy in Northern Ireland in absence of a functioning Executive, amid significant political and civil society opposition to the policy, is a complete abdication of responsibility on behalf of the British Government.

It is all the more heinous given Northern Ireland’s unique law that requires all serious crimes, including rape, to be reported to police. This will place benefits assessors in a difficult position, where they must report disclosures of rape to police, or risk being criminalised themselves. The impact on rape victims cannot be underestimated – many will feel re-traumatised by police questioning and a criminal investigation that they are not ready or able to endure. Others will view a ‘rape assessment’ and forced criminal investigation as too great a barrier, and will simply not claim the benefits their family needs.

The rape clause is, however, only half of the story. It is a product of the fundamentally flawed two-child tax credit cap, which is an attack on children, on families and on women. It is estimated that the two-child cap will push an extra 200,000 children below the poverty line, and will hit vulnerable families like single mothers and victims of domestic violence hardest. And in Northern Ireland, where abortion is inaccessible to women who cannot afford to travel to GB, the impact of the cap will be even more acute.

Women’s Aid in Northern Ireland, along with our sisters across the UK, are united in opposition to both the 2-child cap and the rape clause, and we are backed by organisations across civil society working with victims, with families, with women and with children. Our Northern Irish politicians in Westminster, who have all previously voiced their opposition to both the two-child cap and the rape clause, must use all influence at their disposal to pressure the Conservative Government to revoke this abhorrent law. The question for Theresa May must be not if they revoke this horrendous law, but when.